(This history has been written by Dr. Greg Lodge. Any comments, amendments, additions can be sent to greglodge68@hotmail.com. Memories, anecdotes, photographs, memorabilia  all gratefully received)

The Roman Catholic tradition has always been well represented in and around Tadcaster. Mass has been celebrated - in good times and bad - for many centuries. Though there would have been Catholic worship in Tadcaster itself under the Saxons, the roots of St Joseph's can be said to go back to the time of ''1066 and all that'' as the Norman Conquest brought supporters of the victorious William the Conqueror to the area - notably Hazlewood. The first mention of Hazlewood is in 1086  when it was in the possession of  Malger, the tenant of William de Percy. Technically Malger would have been the sub-tenant or vavasour of de Percy - a man who held his land not direct from the king but from another - and eventually Vavasour became the accepted surname of the family. There is an excellent representation of the Vavasour arms on a stained glass window on the north wall of St Joseph's and the family arms are also carved at the east end of York Minster - built with stone from the Vavasour quarries. 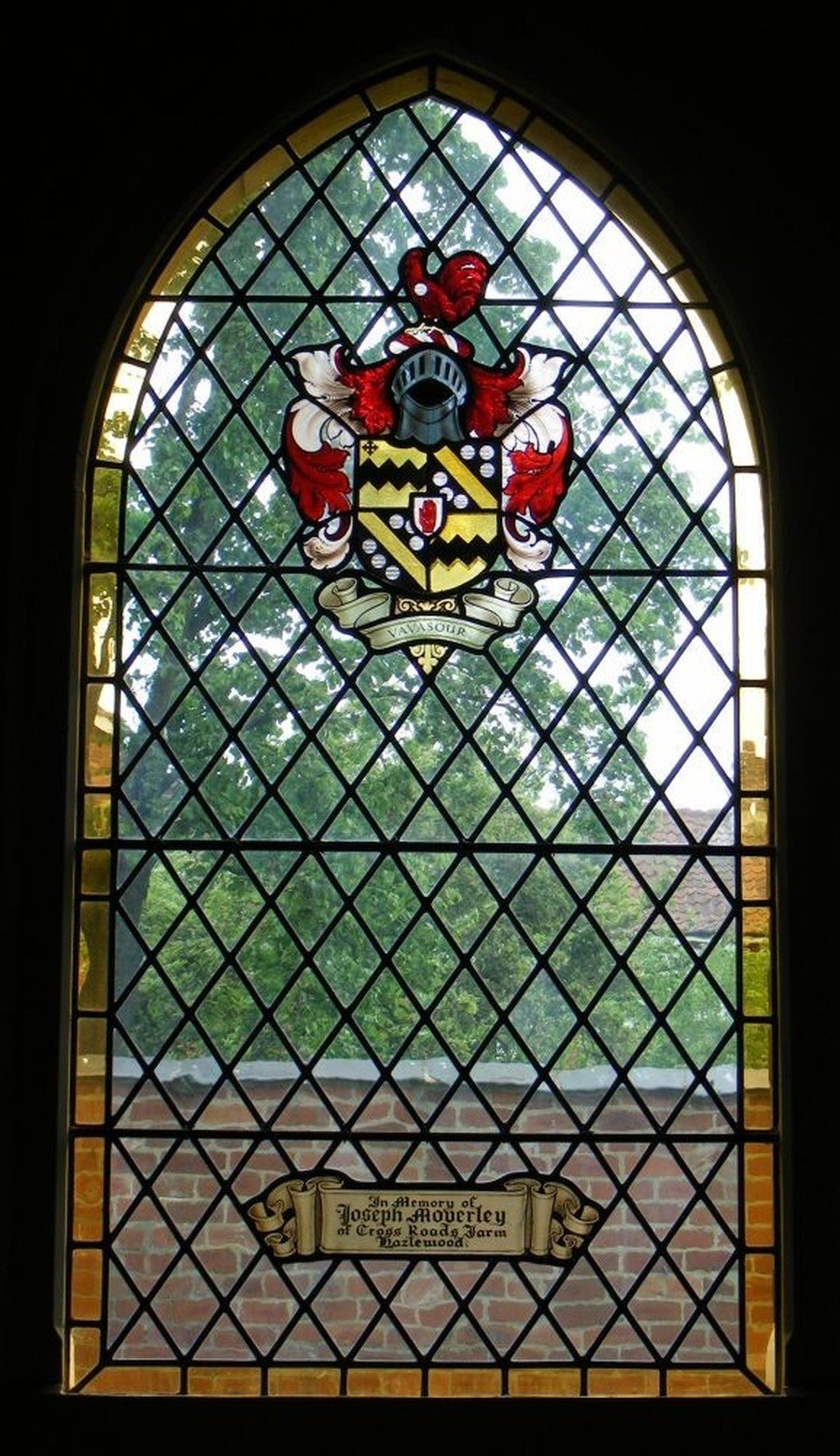 By 1189 a chapel existed at Hazlewood because the then daughter of William de Percy granted the church at Tadcaster and the chapel at Hazlewood to the new Cistercian Abbey of Sawley in Ribblesdale - the monks would have appointed a priest.  In 1286 Sir William la Vavasour obtained a licence from the King to endow a chapel at Hazlewood wth a house and forty acres. The chapel  - essentially a chantry chapel where Mass was held daily for the souls of the benefactor and family - was dedicated to St Leonard - a 6th Century Frankish monk who had become very popular in the 11th Century - the period of the Crusades -  as a miracle worker and liberator of prisoners.

The Vavasour's were very strong supporters of the church. In 1225, for example, Robert Vavasour allowed free access to his quarries - now Jackdaw Crag quarry in Stutton - for the taking of stone needed for the Minster at York. Lady Margaret Vavasour , who died in 1415, left money for the repairs of both St Leonard's and St Mary's in Tadcaster as well as money for the Carmelites in York - interesting given the later connection. St Leonard's continued as essentially the Vavsour family church serving those around the settlement. An insight into what this meant is given by the will of Sir Henry Vavasour who died in 1500 and required in his will that his chantry priests every Easter week were to stand around his grave and sing the psalm In Exitu Israel De Aegypto for which each chantry priest would recieve 4d and any other priest who was there in vestments, 2d..

The Reformation had a profound impact on Hazlewood though family members continued to hold high office. William Vavasour lived through the Reformation and was Sheriff of Yorkshire, MP and member of the Council of the North. His will though clearly suggested he retained the faith as he provided for the Marian priest, Thomas Shelitoe, to receive board and lodings and "the divine service to be done" at Hazlewood. Shelitoe was still serving Hazlewood in 1575.

However, times were hard and the priest holes in the castle reflect the fact that celebrating the Mass was dangerous. The chantry chapels were dissolved and the running of the church was absorbed by the Crown - it seems that the stipend to a Catholic priest was still paid but out of the pocket of the Vavasours. Clearly the family suffered much in trying to keep the faith alive and were seen as recusants or refusers of the new religion. Oddly though Elizabeth I seems to have exempted John Vavasour and his wife from having to receive communion under the reformed church - maybe because of the family's contribution to the civil governance and military strength of the state - notably the raising of troops at the time of the Armada -  or, as some have said, because of the queen's personal liking for Anne Vavasour, her maid of honour. Still, though the family paid fines as recusants, had lands sequestrated and were imprisoned they continued to adhere to the true faith. If you visit St Leonard's Chapel the monument of Sir Thomas Vavasour (d.1632) describes him as famous for his "constancy in the true religion".

By the more enlightened Nineteenth Century, times had eased. In 1829, for example, Edward Vavasour gave stone from his quarry to York Minster for repairs following a fire. Eventually, of course, penal laws were repealed and the Catholic hierarchy restored. By 1840 the number of Easter communicants was 176 in an undefined parish estimated to extend for eight miles around the castle. In Tadcaster itself it became clear that there was a pressing need to cater for the sacramental needs of the growing Catholic population of Tadcaster and a  chapel of ease was established in 1866 attracting congregations of 300 and more. This certainly was a convenience as some older parishoners still recall their grandparents talking of the walk from Tadcaster along Chantry Lane and past the Stone cross - erected, some say, to keep the plague from Hazelwood - to Mass at St Leonards and back!

It was clear that the temporary chapel was inadequate and in 1868 the Vavasour family gave land in Tadcaster - an 1849 OS map shows only open land  - for the Church of St Joseph's with associated school and presbytery. Canon Philip Vavasour, Chaplain at St Leonard's, took a major role in this project. The Church, funded, it would seem by a public subscription which raised £1500, was built in a 14th. Century Gothic style from, it is said, a design by the Gothic Revival architect, George Goldie, who also designed St Wilfrid's the unofficial Catholic cathedral of York. St Joseph's had a very distinctive timber barrel roof and statue of St. Joseph holding the infant Christ which still stands above the main door in the west gable. A memorial stained glass window  dedicated to Canon Philip Vavasour is second left on the altar - the window represents St Philip Neri, patron of the Secular Clergy.

Bulmer's Directory of 1890 has this somewhat inaccurate entry about St Joseph's,

The Roman Catholic Chapel of St. Joseph, situated in West Tadcaster, is a red brick building relieved with stone dressings round the windows and doorways. It was erected in 1865, at a cost of £1,100, by the late Rev. Canon Vavasour. The interior is plain, and consists of nave with centre aisle leading up to the altar. There are open benches on each side, affording accommodation for 300. The ceiling is open timbered and boarded, and the windows are Gothic, filled with small square panes of plain glass. The Rev. Gustave Thonon is the priest, and resides at Hazlewood.

The church which was built with stone from the same source as that used for York Minster was opened officially on August 31st 1869 by Cardinal Manning, Archbishop of Westminster (see picture below) -  a convert from the Anglican persuasion and contemporary of Newman. A pontifical High Mass was celebrated in the forenoon by the Bishop of Beverley, Rt. Rev. Robert Cornthwaite - who went on to become the first post-Reformation Bishop of Leeds. Important dignitaries, though Tadcaster folk might have been a little surprised that they had to buy a ticket to attend the opening ceremony ( 5/2d., 6d., or 1/-) from the Londesborough Arms (the old White Horse, now the Angel and White Horse) where a celebratory lunch was held afterwards (for another 3/-).

The day was rounded off (for another 6d, or 1/-) with Vespers and Benediction.

The Church continued to be served from Hazelwood for many years but the increasing demands of the Catholic population at Tadcaster - a population which, as the graves from this period in Tadcaster cemetery demonstrate, was gathered from many places - itself required action and a new parish was created focused at St Joseph's. During the 1890s the mission returns show that the church at Tadcaster had become the main church - in 1895 for example, there were 55 Easter communicants at Hazelwood compared to 180 at St Joseph's. Technically this was a new ''mission'' as ''parishes'' did not strictly come into operation until after 1917. Additionally, it is very difficult to pin down the actual date at which the parish of St Joseph's came into being as it is unlike something as concrete as a church which requires a formal opening.

However, much of the evidence points to 1897 as the year in which St. Joseph's came into being. In 1897 over 220 parishioners were recorded as Easter communicants- a large increase over the previous year.  By 1897/98 the Church Diocesan Education Association collection is noted as coming from ''Tadcaster come Hazelwood'' and the princely sum of £1 is donated. It would seem safe to say that the church was served from Hazelwood upto 1896 and by 1898 was minstered to from Tadcaster which suggests that the first parish priest of St. Joseph's - Father John Bradley - was in place in 1897 (despite the inscription on Father Bradley's memorial in Tadcaster cemetery).